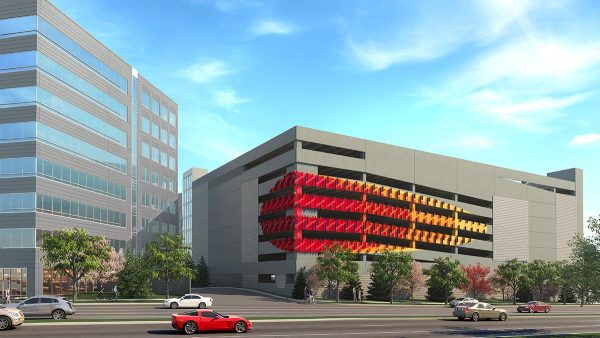 Painting and installation will begin today on a major public art project for the Merriweather District in Downtown Columbia, The Howard Hughes Corporation® (NYSE: HHC) announced today.  The work of art will be sited on the north and west sides of the parking garage on the corner of Broken Land Parkway and Little Patuxent Parkway.

Created by Vicki Scuri Siteworks, “Rainbow Sunset” is a large-scale installation that activates the faces of the garage and creates a visual statement with a dynamic sense of dimension of color. The installation focuses on the optical blending of color as enhanced by the sun. The curves created by the use of translucent polycarbonate material placed over a field of painted graphics suggest the warm hues inspired by Maryland’s sunsets.

A months-long thoughtful process of exploration revealed how various colored painted blocks on the façade of the garage could interact with light and create a vibrant façade. “During the day, the work interacts with sunlight to create ever-changing nuances of color, light and movement,” according to artist Vicki Scuri.

The Downtown Columbia Plan, adopted in 2010 by the Howard County Council to guide the redevelopment of the center core of the city, calls for works of art to be incorporated in new amenity spaces and private developments and suggests that “the walls of buildings and parking garages could become the surfaces” for works of art.

The first of such works appeared in 2015 at the West Promenade of The Metropolitan luxury apartments on the ring road of The Mall in Columbia. “Petal Play,” features large scale colorful flower-like forms designed by Baltimore area sculptor Mary Ann Mears. The adjacent multifamily projects, known as m.flats and TEN.M, will also feature major public art by sculptor Rodney Carroll.

Scuri, Mears and Carroll, along with William Cochran of Cochran Studio, will be featured in a program presented by the Howard County Arts Center on Sept. 6. They will be discussing art’s role throughout Columbia’s past, present and future and sharing observations about Selections from The Rouse Company/The Howard Hughes Corporation Arts Collection exhibit which will be on display at the Howard County Arts Center galleries Sept. 1-Oct. 13. The exhibit includes 27 pieces from the art work acquired over the years by The Rouse Company and displayed at its headquarters in Columbia. The art works have been in storage since renovation began on the Rouse headquarters, a building in Downtown Columbia designed by renowned architect Frank Gehry and now the home of Whole Foods Market and Haven on the Lake spa.