COLUMBIA, MD (July 9, 2020) The Downtown Columbia Partnership (DTC) and The Howard Hughes Corporation (HHC) proudly announces the fourth annual Books in Bloom (BIB) book festival, Downtown Columbia, Maryland’s, ultimate celebration of the joy of books and reading. Books in Bloom will bring together some of the country’s best and brightest authors in a new virtual format over a six-week period this summer. This year’s event will also continue its tradition of activism through literature by encouraging open dialogue on themes of diversity, racism, inequality, and culture through the art of books. All programming will be available online at booksinbloommd.com. 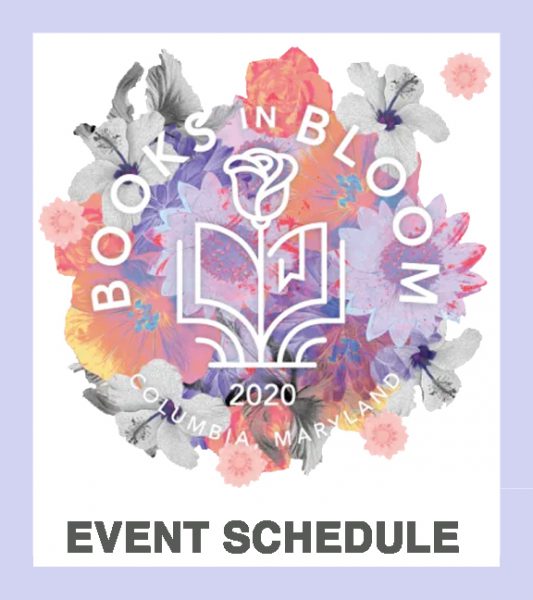 “We are thrilled to continue the tradition of Books in Bloom in a way that fits the needs of today’s world,” said Phillip Dodge, Executive Director of the Downtown Columbia Partnership. “This event is needed now more than ever as communities like ours across the country are having important conversations about equality, justice and race. We are excited that our programming will support those dialogues and be available both in our community and nationwide through this new format.”

Headlining the festival is sociologist Robin DiAngelo, author of New York Times bestseller White Fragility. Originally published in 2018, the book rose to popularity after the death of George Floyd because of its deep look at race in America. On August 20, she will close out the festival with a moderated discussion on the book’s themes which explore the counterproductive reactions white people have when their assumptions about race are challenged, and how these reactions further racial inequality in America.

The festival will open on July 16 with Molly Ball, TIME magazine’s national political correspondent and a political analyst for CNN, and author of New York Times Bestseller Pelosi, a fresh look at the most powerful woman in politics, House Speaker Nancy Pelosi.

The festival will feature 12 authors in total including in order of appearance:

“Art and technology are the backbone of the culture evolving in Downtown Columbia,” said Vanessa Rodriguez, Vice President of Marketing at The Howard Hughes Corporation. “This year’s Books in Bloom allows us to discuss issues of importance and to share beauty and joy through an online format accessible to a diverse and inclusive community.”

From July 13-August 20, the Books in Bloom (BIB) festival will feature various programs, panels, contests and events for a wide range of interests and age levels on its virtual platform including: Author-led conversations and panels, writers’ workshops ranging from poetry and Haiku to young writers workshops, children’s activities and story times, book clubs, a classic literature-inspired cocktail class and more to be announced on a rolling basis.

Originally planned to take place in Downtown Columbia’s Merriweather District, the now virtual series will include partnerships with established local businesses such as the popular restaurant CURED and 18th & 21st that will create a book club box that includes a bottle of wine, a copy of the book, and a signature CURED snack. The box will be accompanied by a moderated, virtual book club session you can attend from the comfort of your own home. The festival will also partner with DC-favorite and future Downtown Columbia neighbor Busboys and Poets, the civic-minded bookstore and restaurant, that will be opening its largest location in the heart of Merriweather District.

The Downtown Columbia Partnership promotes and advances the growth of Downtown Columbia as a vibrant, diverse, creative, economically robust and desirable place for employment, entertainment, living and learning. Its initiatives, such as Books in Bloom, include supporting cultural and arts programs aimed at enhancing residents’ quality of life, especially in a time of social distancing. Howard County is home to one of the most well-educated communities in the country and is well-known for its book clubs, poetry and literature organizations, literary publications and award-winning library system.

The decision to move the event to a new format was made due to concerns surrounding COVID-19 and the desire to maintain the health and safety of the community. This year’s festival will still build off the momentum of previous events which included award-winning authors Chimamanda Ngozi Adichie, Chef Jose Andres, Michael Eric Dyson, April Ryan, Chef Kwame Onwuachi, Chef Edward Lee, David Ebershoff, and Brittney Cooper.

The festival is FREE and open to the public. For more information, visit: https://www.booksinbloommd.com/.

About the Downtown Columbia Partnership

About The Howard Hughes Corporation®

The Howard Hughes Corporation owns, manages and develops commercial, residential and mixed-use real estate throughout the U.S. Its award-winning assets include the country’s preeminent portfolio of master planned cities and communities, as well as operating properties and development opportunities including: the Seaport District in New York; Columbia, Maryland; The Woodlands®, The Woodlands Hills®, and Bridgeland® in the Greater Houston, Texas area; Summerlin®, Las Vegas; and Ward Village® in Honolulu, Hawaiʻi. The Howard Hughes Corporation’s portfolio is strategically positioned to meet and accelerate development based on market demand, resulting in one of the strongest real estate platforms in the country. Dedicated to innovative placemaking, the company is recognized for its ongoing commitment to design excellence and to the cultural life of its communities. The Howard Hughes Corporation is traded on the New York Stock Exchange as HHC. For additional information visit www.howardhughes.com.

A development of The Howard Hughes Corporation®, Downtown Columbia is located at the center of Columbia, MD, one of the first master planned communities in the U.S. founded by legendary developer James W. Rouse in 1967. Conveniently located between Washington, DC and Baltimore, Columbia is composed of 14,000 acres including ten completed residential villages and a deep pipeline of commercial development opportunities within its Downtown. At full buildout, the redevelopment of Downtown Columbia will include three new and reconfigured neighborhoods – Merriweather District®, Lakefront District and Central District featuring more than 14 million square feet of residential, office, hotel, retail, cultural, and public uses including public parks, trails and more.

The underdeveloped core of Columbia became the subject of an extensive five-year process that culminated with the passage by the Howard County government of the Downtown Columbia Plan in 2010, a guide to creating a vital area in which residents can live, shop, work, exercise, and enjoy cultural opportunities in an enriched natural setting. More information is available at www.howardhughes.com.