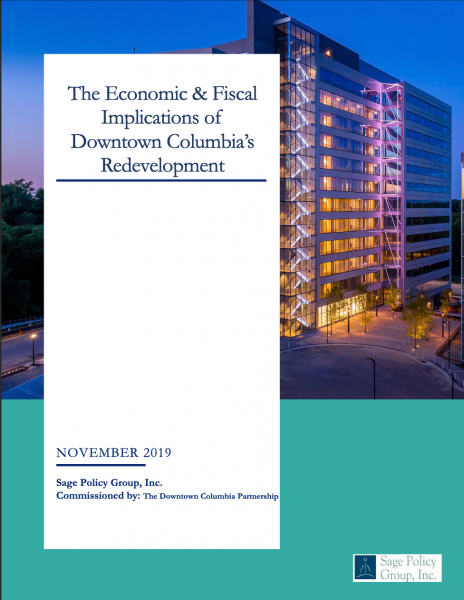 The Downtown Columbia Partnership commissioned Sage Policy Group to study the economic and fiscal implications associated with implementation of the Downtown Columbia Plan (the Plan). In 2010, Howard County adopted the Plan with the goal of revitalizing the downtown area with a diverse assortment of housing and business opportunities and a plethora of cultural, civic, recreational, and educational amenities.

The Plan, which was most recently amended in 2016, encompasses up to 4.3 million square feet of new office space, 1.3 million square feet of new retail space, more than 6,200 new residential units (many of which are below market-rate units), and 640 hotel rooms. Note that this is supplemental to the existing built environment that currently comprises Downtown Columbia.

Sage found that Downtown Columbia’s redevelopment is providing Howard County with a new source of tax base while strengthening public infrastructure. Below are our key analytical findings:

Report: The Economic and Fiscal Contributions of Downtown Columbia